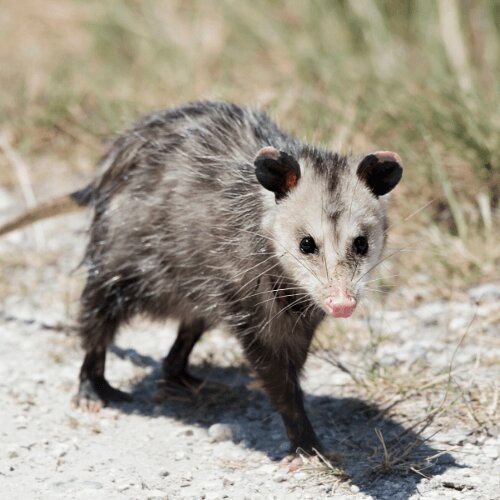 Request Inspection
Many homeowners think of opossums as dirty, unintelligent creatures who specialize in acting like roadkill. But it is quite the opposite: Opossums are smarter, cleaner, and more beneficial to humans than many of their woodland neighbors. Here at Wildlife Prevention and Repair, we can trap and remove opossum from your home, giving you peace of mind.

They Can’t Choose When To Play Dead

If an Opossum experiences danger, it curls up and falls to the ground where it can remain for many hours, staring emptily ahead and sticking out its tongue. It’s an extraordinary defensive mechanism that researchers describe as a comatose-like state. But to our surprise, they do not have any control over when they play dead or for how long they do it. Unfortunately, it also gives off a bad odor that can stink up your home or yard.

While most animals look at a snake and instinctively see the danger, an opossum considers it food. They have developed some immunity to most snake venom, with the exception being the coral snake. For a long time, researchers have been attempting to harvest opossum’s anti-venom abilities. Recently, a team of scientists progressed on this front when they recreated a peptide found in opossums. They found that when mice are given that same peptide and injected with rattlesnake venom, the mice become immune to their harmful effects.

Their Tail Acts As A Fifth Attachment

Opossums are one of the few animals with prehensile tails. You can think of their tail as an extra arm. They can transport grass and leaves for building nests or grip the sides of trees to provide additional stability while climbing. Baby possums can also use their tails to hang from branches upside down as depicted in cartoons. Unfortunately, when these animals enter your residence, they threaten its structural integrity. By trying to make your home their home, they may use various parts of the house to build a place to nest. Additionally, they can leave behind droppings, which cause foul odors and can be a health hazard. If something just doesn’t smell right, don’t hesitate to contact us.

Even though opossums have a fierce bite, the more significant threat they carry is diseases, spread through urine or feces. Leptospirosis, which can cause kidney damage in humans, and Coccidiosis or Tularemia, which can lead to problems for your pets, are a risk. They are typically docile creatures, though, and generally will bite only if scared, mainly when cornered, and thinks that its young are in danger.

At Wildlife Prevention & Repair, taking care of nuisance wildlife is what we do. If you are worried about opossum being a danger to you or your family, please don’t hesitate to contact us as soon as possible. We are a family-owned company, and our goal is to leave you pest-free while making you feel like one of our own. The opossum is just one of many bothersome creatures we deal with. Call us today for a free estimate. We offer opossum removal services in Humboldt, Milan, Union City, and other surrounding areas!